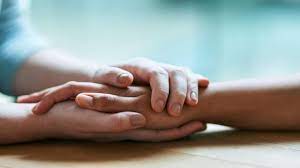 Many times in our scriptures Jesus seems to be pairing God’s forgiveness of us with our forgiveness of others. He says “The measure with which you measure will be measured back to you…” “Do not judge others, and God will not judge you”…Even in the Our Father, that we pray together each week, we ask God to “forgive us our trespasses AS WE forgive those who trespass against us.” But why? What’s the connection?

I would invite you to read the parable of the Unmerciful Servant found in the Gospel of Matthew 18:21-35

Do you think this reading is not so subtlety saying “Hey, I forgave your sorry astronomical debt of a gazillion dollars, so the very least you could do is forgive the guy who owes you a measly $20 bucks? Is God’s intent to make us feel bad enough about how much we owe, so he can get us to do the right thing And what’s with the threat of torture in the last two verses if we can’t manage to forgive? It just doesn’t sound like the merciful God that Jesus is always talking about, right?

Here, I think we need to remind ourselves that the bible is man’s experience of God written down and that the author of the book of Matthew is probably a good Jewish boy, steeped in Old Testament imagery, writing for a Jewish audience, so this is his effort to imitate the holy books he studied his whole life.

In the Old Testament, God sometimes sounds harsh and exacting because it was a preliterate, ancient people who were passing along these stories and their experience often reflected the harsh, exacting world in which they lived. So, it’s not a surprise that God sometimes sounds like a parent scolding his 2-year-old who reaches for the hot stove. That’s why God seems to change from the older books of the bible to books written later. Just as we talk and reason with a toddler different than a teenager, so does God. It’s not God that has changed, but it is we who have grown.

So maybe Matthew, like his ancient teachers, is trying to instill a little bit of fear in us so as to keep us safe. Not to mention, the author of Matthew was likely raised by a good Jewish mother who probably could wield guilt like a ninja. So, maybe that’s why God comes across a little like a manipulative mother. Can’t you hear it? “I endured 14 hours of labor to bring you into this world and you can’t even forgive your sister from your heart?”

The point is, this doesn’t sound like how God operates, but it definitely sounds like our M.O. You’ve heard it said “God created us in his own image and we have been trying to return the favor ever since.” God can get pretty tiny and petty, if we’re not careful.

Forgiveness for Jesus is a quality of being, not a numbers game. It’s a way of living, relating, thinking and seeing that begins with the gift of God’s boundless mercy to each of us. God is the vine and we are the branches, but if we block the free flow of divine mercy through us, as the unforgiving servant did, we condemn ourselves to a form of torture. A prison of our own choice and making.

Our culture (both now and in ancient times) tells us that evil is fought though might and muscle. That the way we combat evil is by making sure that people get what they have coming to them – so they learn not to mess with us. An eye for an eye. You attack me and I attack you.

That’s why when Peter, thinking he is being super generous, asks Jesus,  “So, how many times do we have to forgive, 7 times?” (way more than is required by Jewish law by the way….) We can see Jesus vigorously shaking his head saying “no, no, no Peter, you are missing the point entirely! God is waaaay bigger than that! Not 7 times, but 77 times!

Jesus is using extreme exaggeration in this parable to try and wake Peter up. The King’s generosity is so unheard of and the amount forgiven is so ridiculously enormous – like 7 billion dollars – the guy would have to work everyday for 3000 years to pay it off. The forgiveness of this crippling debt should have a really noticeable effect on the servant’s life – like throwing a stone into the middle of pond: you expect to see ripples.

But in this story – there are no ripples. The world ought to have changed for this servant, but it’s like he doesn’t even notice or appreciate that he has been set free. It’s just business as usual. He is still counting. It’s still the merciless world in which people get exactly what they deserve.

And this is where we come to the question: What is this scripture saying to me? We might ask with Peter: Does that mean we need to forgive the drunk driver? The cheating spouse? The lying businessman? The racist? The rapist? The bully? The abusive parent?  The greedy corporation? Even terrorists? (Marsh) Yes. That is exactly what Jesus is saying.

And let me tell you, I find this completely unreasonable. I shutter sometimes when I think of what I’m capable of if someone should hurt one of my children – let alone even the idea of forgiving such a person. It borders on ridiculous. And that is exactly what Jesus wants us to take away from this parable. The world has changed.

God expects us to forgive as a result of our being forgiven for the same reason we can expect to be wet after diving into a lake: water is wet and when you immerse yourself in it, you get wet.  (Hoezee) So too with Gods’ mercy. We are drenched and dripping with the stuff and yet we still feed our little grudges against one another.

Some will ask, but doesn’t such lavish forgiving somehow say that what the person did against us was ok?  Isn’t forgiving over and over just the thing that keeps battered women battered?” On the contrary, forgiveness is the strongest form of resistance.  We don’t overlook or approve what was done. We can never ignore cruelty or injustice – in fact we are called to fight it vigorously – but, we have to fight it with the right tools.

Pastor Nadia Bolz-Weber says “Forgiveness is actually the opposite of saying that what someone has done is ok. It’s saying it’s SO NOT ok that I am not going to absorb it anymore. I simply won’t be tied to it. That is why we need to forgive. Because we can’t be bound to that kind of evil. Unforgiveness is like drinking poison and waiting for the other person to die.

When we forgive someone, it’s not an act of niceness, it’s not being a doormat, it’s an “act of fidelity to God’s evil-combating campaign.” It’s the stuff of super-heros!

On the cross God allows our human system of scape-goating, fear, and retaliation to play its natural course. And then Jesus shows us God’s method of fighting evil, not by condemning those who put him on the cross but rather by speaking words filled with mercy, forgiveness and the promise of God’s faithfulness.  He absorbs and detoxifies the evil thrown at him, and that is exactly what we are called to do if we choose to follow him.

Jesus spent his whole life telling people they were forgiven, accepted, loved…freeing them…showing them God’s boundless mercy. Forgiveness breaks the cycle of evil. As difficult as it may be, we are designed to be a conduit of God’s mercy – making known not the “one-false-move” God but rather the “no-matter-what-ness” of God that Jesus lived and taught (Boyle).